The GameObject is the most important concept in the Unity Editor. Every object in your game is a GameObject, from characters and collectible items to lights, cameras and special effects. However, a GameObject can’t do anything on its own; you need to give it properties before it can become a character, an environment, or a special effect.

To give a GameObject the properties it needs to become a light, or a tree, or a camera, you need to add components
to it. Depending on what kind of object you want to create, you add different combinations of components to a GameObject. You can think of a GameObject as an empty cooking pot, and components as different ingredients that make up the recipe of your game. A GameObject always has a Transform component attached (to represent position and orientation) and it is not possible to remove this. The other components that give the object its functionality can be added from the editor’s Component menu or from a script. 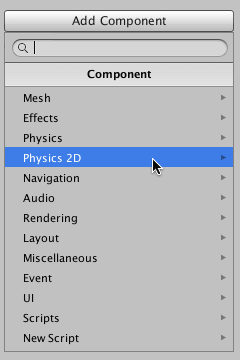 The mesh geometry of an object only gives a rough approximation of the shape while most of the fine detail is supplied by Textures. A texture is just a standard bitmap image that is applied over the mesh surface. You can think of a texture image as though it were printed on a rubber sheet that is stretched and pinned onto the mesh at appropriate positions.

Materials are used in conjunction with Mesh Renderers, Particle Systems and other rendering components used in Unity. They play an essential part in defining how your object is displayed. They control the visual appearance of gameobjects.

A Tag is a reference word which you can assign to one or more GameObjects. For example, you might define “Player” Tags for player-controlled characters and an “Enemy” Tag for non-player-controlled characters. You might define items the player can collect in a Scene with a “Collectable” Tag.Tags help you identify GameObjects for scripting purposes. They ensure you don’t need to manually add GameObjects to a script’s exposed properties using drag and drop, thereby saving time when you are using the same script code in multiple GameObjects.

For optimal performance, it is best to pack graphics from several sprite textures tightly together within a single texture known as an atlas. Unity provides a Sprite Packer utility to automate the process of generating atlases from the individual sprite textures.Unity handles the generation and use of sprite atlas textures behind the scenes so that the user needs to do no manual assignment. The atlas can optionally be packed on entering Play mode or during a build and the graphics for a sprite object will be obtained from the atlas once it is generated.

They are the devices that capture and display the world to the player. By customizing and manipulating cameras, you can make the presentation of your game truly unique. You can have an unlimited number of cameras in a scene.

Rigidbodies enable GameObjects to act under the control of physics. The Rigidbody can receive forces and torque to make your objects move in a realistic way. Any GameObject must contain a Rigidbody to be influenced by gravity, act under added forces via scripting, or interact with other objects. Rigidbodies must be explicitly added to your GameObject before they will be affected by the physics engine, but you may need to add a Collider or a Joint to get it to behave exactly how you want. If one or more Collider components are also added, the GameObject is moved by incoming collisions.

The Rigidbody component has a property called Is Kinematic which removes it from the control of the physics engine and allow it to be moved kinematically from a script. It is possible to change the value of Is Kinematic from a script to allow physics to be switched on and off for an object, but this comes with a performance overhead and should be used sparingly.

Colliders are another kind of component that must be added alongside the Rigidbody in order to allow collisions to occur. If two Rigidbodies bump into each other, the physics engine will not calculate a collision unless both objects also have a Collider attached. Collider-less Rigidbodies will simply pass through each other during physics simulation.
Collider components define the shape of an object for the purposes of physical collisions. A collider, which is invisible, need not be the exact same shape as the object’s mesh and in fact, a rough approximation is often more efficient and indistinguishable in gameplay. Colliders can be added to an object without a Rigidbody component to create floors, walls and other motionless elements of a scene. These are referred to as static colliders. Colliders on an object that does have a Rigidbody are known as dynamiccolliders. Static colliders can interact with dynamic colliders but since they don’t have a Rigidbody, they will not move in response to collisions.
When colliders interact, their surfaces need to simulate the properties of the material they are supposed to represent. For example, a sheet of ice will be slippery while a rubber ball will offer a lot of friction and be very bouncy. Although the shape of colliders is not deformed during collisions, their friction and bounce can be configured using Physics Materials.

Prefab acts as a template from which you can create new object instances in the scene. Any edits made to a prefab asset are immediately reflected in all instances produced from it but you can also override components and settings for each instance individually.
When a completely new component is added to a prefab instance, all of its properties will be shown in boldface. Simply dragging the prefab asset from the project view to the scene view will then create instances of the prefab. Objects created as prefab instances will be shown in the hierarchy view in blue text. (Normal objects are shown in black text.)

When you drag an asset file (eg, a Mesh) into the scene, it will create a new object instance and all such instances will change when the original asset is changed. However, although its behaviour is superficially similar, the asset is not a prefab, so you won’t be able to add components to it or make use of the other prefab features.

When game is in Play Mode, any properties in any GameObject’s Inspector can be changed. For example, if you want to experiment with different heights of jumping. If you create a Jump Height property in a script, you can enter Play Mode, change the value, and press the jump button to see what happens. Then without exiting Play Mode you can change it again and see the results within seconds. When you exit Play Mode, your properties will revert to their pre-Play Mode values, so you don’t lose any work.